Best Restaurants in Mykonos, Greece | Where to Eat in Mykonos

Best Restaurants in Mykonos, Greece | Where to Eat in Mykonos

Home » travel tips » Best Restaurants in Mykonos, Greece | Where to Eat in Mykonos

When it comes to the delights of European cuisine, the Mediterranean is home to some of the continent’s most diverse, and unique delicacies, which often take center stage on the menus of restaurants, and on the tables of home kitchens, across the world.

And the country of Greece, located in southeastern Europe in the Mediterranean region, is no exception. Recorded since ancient times, Greek cuisine is embedded in the country’s culture, with an influence that has spread throughout Europe to even some of the most famous empires throughout history.

But, largely, Greece’s cuisine has been influenced by wider traditions from other ancient empires, including the likes of the Ottomans, Turks, and Arabians to name but a few. This means that some of the country’s best-known dishes have been formed from this influence, including delicious dishes like Tzatziki and Baklava. These unique cuisines have been intricately woven over thousands of years into a perfect gastronomic ballad, which we now know, and love, to be Greek cuisine.

Greece’s mainland and islands are home to some of the best eateries showcasing the delights of Greek cuisine in all of its glory. From traditional tavernas to five-star restaurants, wherever you discover you’ll no doubt find a sumptuous place to eat around the corner.

As the second most popular island in the Greek Cyclades, it’s no surprise to hear that Mykonos is the location of one of the country’s most notable gastronomic scenes. And with its charming settlements and vibrant towns teeming with authentic backstreet cafes, and magnificent seafront restaurants, it’s no wonder!

But, if you find yourself planning a trip here and not knowing where you want to go to sample some of the best food on offer, we’ve outlined the best restaurants in Mykonos for you to savor some of the island’s most delicious dishes and revel in its outstanding gastronomic experiences. 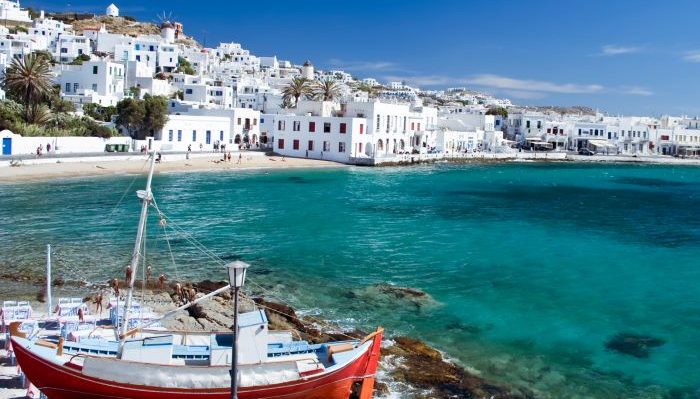 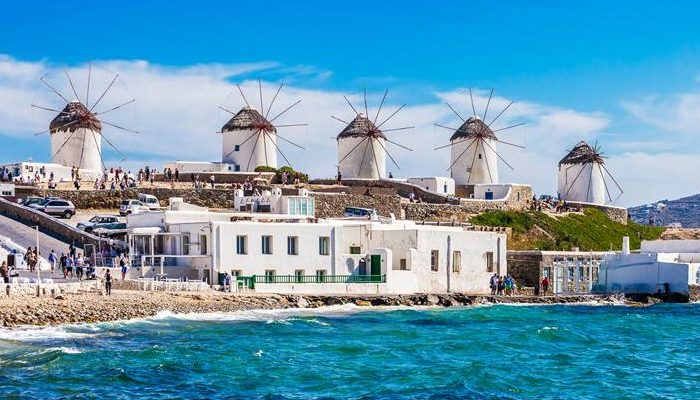 Starting at the top of the list of our recommended best places to eat in Mykonos is M-Eating. Regarded as one of the top restaurants in Mykonos town, this local kitchen housed in a traditional white-washed Mykonos building offers mouth-watering Mediterranean cuisine to its guests.

Offering a rustic and contemporary dining experience, and a variety of seating options including a balcony, indoor space, outdoor street-view tables, and a garden area, you’re spoilt for choice in this light and airy eatery.

The restaurant is located in Mykonos town and is open from 7 pm until 1 am every day of the week – perfect for those looking for a wholesome dinner in Mykonos.

Yialo Yialo is a beachfront bar, cafe, and restaurant offering a completely versatile dining experience, putting it high on our list of where to eat in Mykonos during your stay. We would even go as far as to say it is one of the best restaurants in Mykonos with a view.

The eatery borders Platis Gialos, on the south of the island, one of Mykonos’ most cosmopolitan beaches, and serves delicious Mediterranean and Greek cuisine. And whilst it may appear like a simple beach hut from the outside, it serves some of the best food in Mykonos inside. Be sure to sample some of the restaurant’s seafood dishes whilst you dine here, as you can’t beat its freshness!

Whether you’re in search of a quick bite to eat at lunchtime, a drink to quench your thirst after a long day of exploration, or you’re looking for a romantic dinner in Mykonos with stunning evening views, Yialo Yialo is an ideal place to fuel up. The restaurant is open from 8 am until 2 am every day. 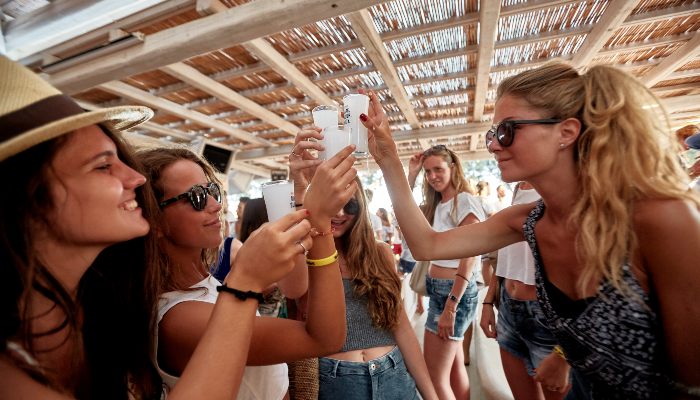 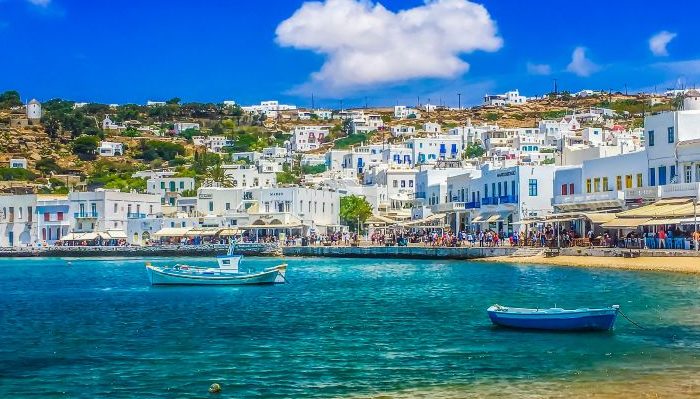 Another restaurant in Mykonos town that’s deserving of mention for serving up some of the best food in Mykonos is Kadena Restaurant.

Located only a short 2-minute walk from one of the town’s most iconic sites, the Church of Panagia Paraportiani, should you finish a day of sightseeing and be working up an appetite, Kadena is one of the most centrally located of the best restaurants in Mykonos town.

Beside the Gialos and its port, settle down for deliciously fresh seafood, Mediterranean favorites, and juicy salads with an unrivaled view of the landscapes surrounding Mykonos from its outdoor seating.

So, with a beautiful sea view on its doorstep and an equally beautiful menu, consider Kadena restaurant during your next visit to Mykonos town. Kadena is open from 7 am until 2 am 7 days a week.

For those seeking a truly traditional Greek dining experience, Saki’s takes the cake. Also situated in Mykonos town, this restaurant has been open since 1986 and has developed its reputation over decades and is now considered to be one of the most famous souvlaki and gyros eateries in the town.

And with gyros and souvlaki being two staple dishes in Greek cuisine, it wouldn’t be fair to not give Saki’s a try at least once when considering restaurants in Mykonos to dine at. Resembling a traditional taverna, the eatery gives comforting homely vibes and serves up equally comforting delicacies, as well as some of the best gyros in town.

Whether you’re looking to grab a takeaway to walk with as you explore the sites and scenes of Mykonos town, or if you’re looking to sit inside the restaurant or on its terrace, Saki’s is the wholesome authentic Greek eatery every Mykonos visitor needs in their lives. Saki’s is open from 11 am until 1 am every day. 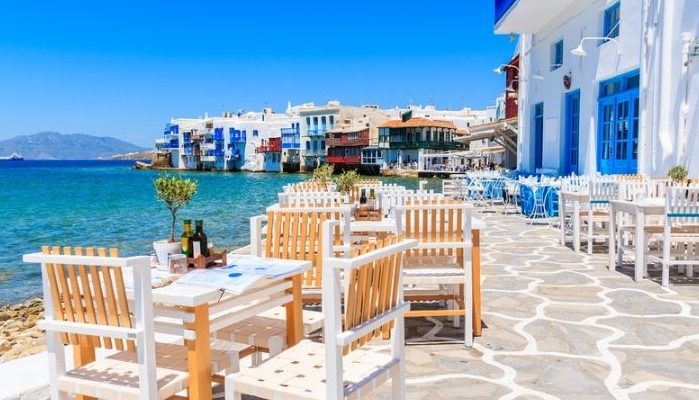 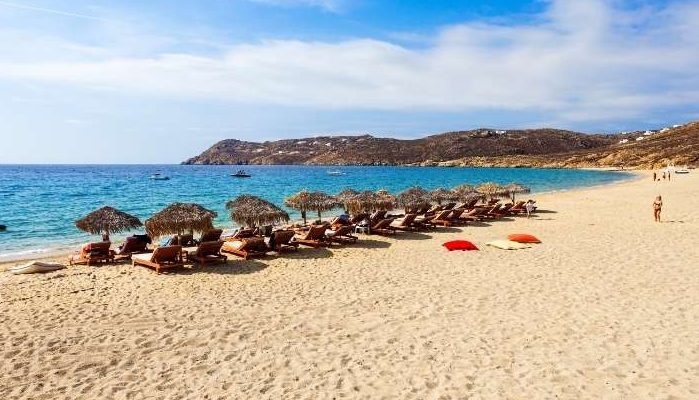 Elia Mykonos Resort, located on Elia beach in the south of the island, is a tranquil destination that oozes sophistication and Greek charm. It can host events, is perfectly located in front of the idyllic Elia Beach, and, most importantly, is home to Elia Mykonos Restaurant.

Run by the Stavrakopoulos family, this Mykonos restaurant and bar is in the most capable of hands, having been serving up exceptional plates to their guests for 40 years. The family also aims to have Elia noted amongst the best beach restaurants in Greece.

The atmosphere of the restaurant is comfortable and elegant, and you’ll dine on some of the restaurant’s most delectable Cyclades, Mykonos, and Mediterranean eats right beside the water’s edge. Utilizing locally sourced ingredients, and pairing its dishes with delicious Greek wines, you’ll have an unforgettable gastronomic experience here.

The restaurant has even received a Gold Award for the quality of taste of its food served in 2022 and is open from 11 am until 12 am every day.

Serving up Mykonian tastes with a modern twist, you’ll find a plethora of fresh seafood and meat dishes as well as salads, desserts, and more that will transport you on a sensory journey of discovery of food in Mykonos.

Located in Mykonos Town, Nautilus Mykonos restaurant is open from 7 pm until 1 am on Fridays and Saturdays, and from 6 pm until 12:30 am from Sundays through to Thursdays. 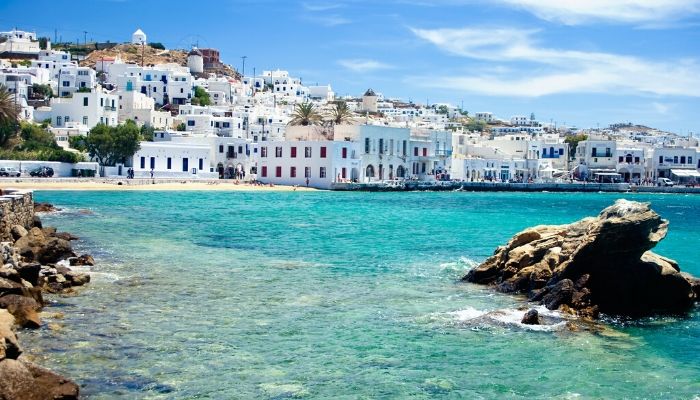 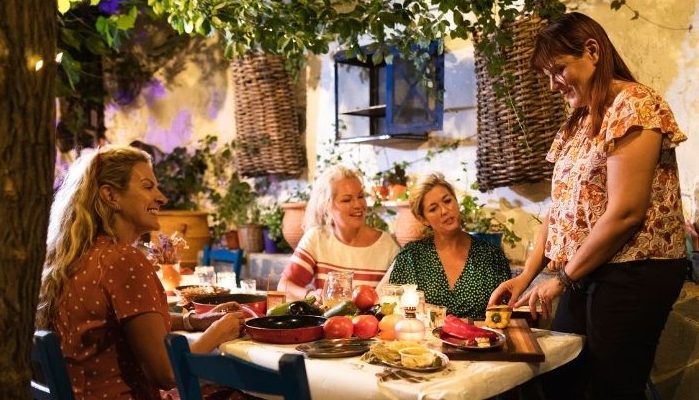 For a truly unique and immersive dining experience in Mykonos, you have to pay a visit to Alemagou Mykonos Restaurant, located on the north side of the island.

Coined as being an alfresco and bohemian eatery, the Alemagou is located beside Paralia Ftelias beach. This all-day beach bar offers its unique culture and ‘mystical energy’ that will leave its guests feeling totally at one with its hybrid environment.

With plenty of open spaces to soak in the scenery, as well as its bar and restaurant, you can simply admire the sights and sounds as you dine on its Aegean fusion haute-cuisine.

With a culinary philosophy that emphasizes and celebrates simplicity, Alemagou is a wonderful example of how sometimes simplicity is the best. Open from 11 am until 12 am daily, why not pay a visit to this top Mykonos food and drink establishment during your next holiday?

Offering traditional Greek cuisine since 1976, Niko’s is a classic Mykonos tavern offering nourishing and wholesome fresh seafood and greek dishes prepared with locally sourced ingredients, in some cases even from Niko’s farm itself!

One of the best Mykonos restaurants on the west of the island, and one of the most charming Mykonos taverns, Niko’s offers a cozy and relaxed environment beside the seashore.

With homely checked tablecloths donning its tables and lovely outside seating to soak in the Mediterranean sun, you can taste the eatery’s mouthwatering salads and seafood dishes, and traditional greek delicacies including Balklava and souvlaki whilst here.

A Mykonos tavern experience is a must during your next visit to the island, and Niko’s is our recommendation if you’re looking for a warming and inviting eatery serving some of the best food in Mykonos.

Niko’s Taverna is open from 12 pm until 1 am every day.

So, it’s not just pristine landscapes, blissful coastlines, and unrivaled weather that Mykonos has to offer, but an array of charming, unique, and delectable eateries as well! Whether you’re a lover of traditional tavernas offering an authentic glimpse into the Mykonos’ real food scene, or a contemporary eatery offering not only beautiful food but equally beautiful views, Mykonos has something for everyone.

For those looking to plan their next trip to Greece, our team here at Unforgettable Greece offer 100% bespoke itineraries so that you can take the reins in planning your perfect Mykonos getaway.

You can contact us by email or by phone and speak to one of our expert travel advisors who will help you craft your next Greek adventure. From private tours along the country’s unspoiled islands to small ship cruises exploring the beauties of the Mediterranean, which will you choose?