Being one of the top European foodie destinations, Greece has so much to offer when it comes to food. From Mykonos to Crete, and Santorini, and from the north part of the country to the most unspoiled Greek islands, Greece promises you to take you on an unforgettable culinary journey!

Here is a travel guide with some of our favorite Greek products and food suggestions!

The unique and delicious cuisine Greece offers has long been one of the reasons that many people travel to the country. While it’s also fabulous for history buffs, beach lovers, sailing enthusiasts and more, in recent years it’s begun offering more organized food tourism with tavernas, farms, guest houses, wineries and many other places producing traditional fare and inviting guests not only to watch meal preparations but take part in the process.

Visitors can enjoy standard offerings like wine and olive oil tastings, along with unique experiences like hunting and tasting delectable rare truffles, learning how to cook fish just right, discovering how cheese is made, gathering fresh vegetables on a farm and more. And here, there’s truly a destination for every taste.

This is just some of what you can sample on your Greek adventure. 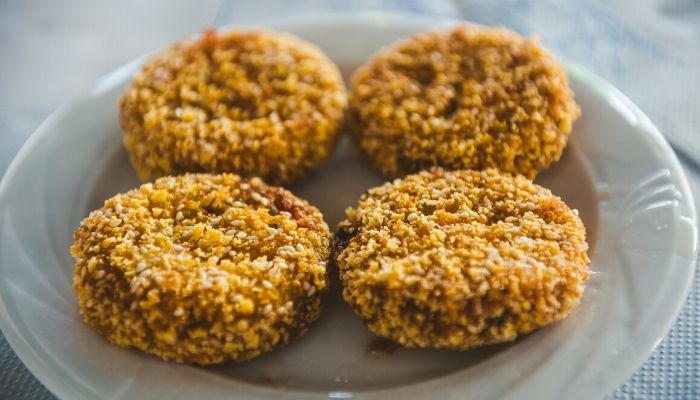 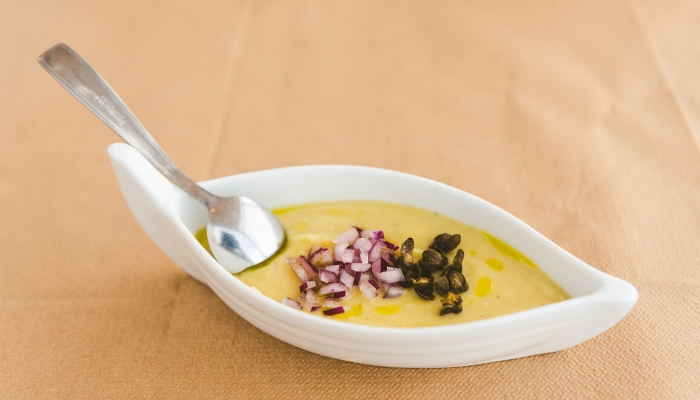 Santorini’s rich volcanic soil produces a unique variety of tomatoes called Santorini tomatoes. While they’re the size of cherries, they aren’t your standard cherry tomatoes. They’re sweet and intensely fragrant, with a flavor and texture that comes from a combination of the nutrient-packed millennia-old volcanic ash and the fact that the vines can thrive with little water. They pull all the moisture they need from the morning mist.

These tomatoes are the focus of a must-try dish known as ntomatokeftedes (also tomatoes gefthedes or tomato fritters). A favorite appetizer, they’re fried in olive oil and mixed with onions, peppers, mint and other herbs in a thick batter.

Arguably the most famous dish in Santorini is fava, and unlike what you might think, this isn’t fava beans rather a puree of yellow split peas. There are few ingredients, typically just yellow split peas, onions, garlic, olive oil, and a little salt. It’s the high quality of the split peas that make the difference as they have a sweeter taste and a velvety texture, unlike other types. They come from the plant Lathyrus clymenum which has been grown here exclusively for more than 3,500 years. It’s often served as a creamy side dish and makes for the ultimate healthy comfort food. 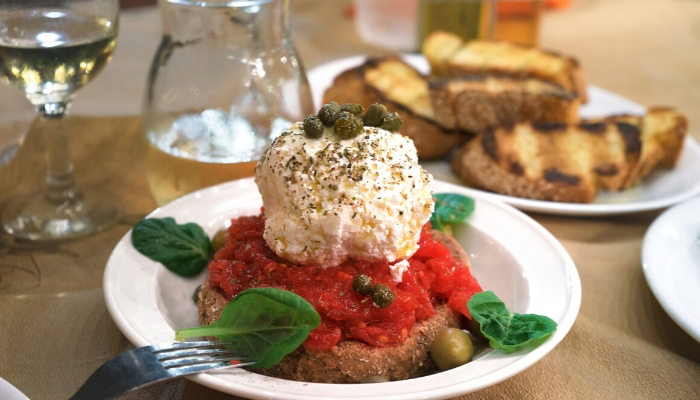 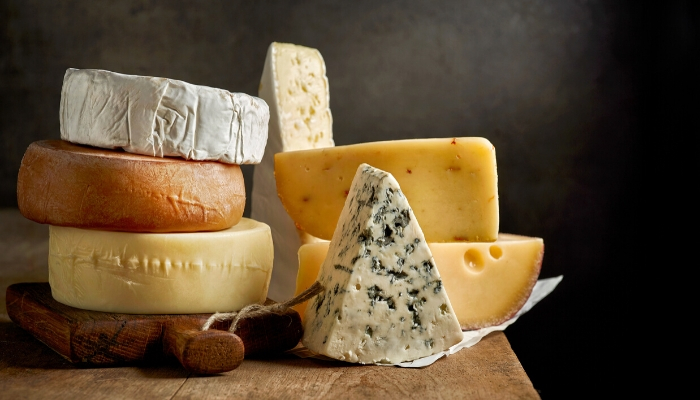 The island of Crete has a unique culture, history, and people as the home of the first European advanced civilization, with the Minoans flourishing here between 3000 and 1100 BC. Cretan cuisine, the basis of the Mediterranean diet, is uniquely its own, with its strength in the freshness and quality of the ingredients – the original, quintessential farm-to-table fare. Nutritious and richly flavored, it uses lots of wild herbs and greens, along with plenty of the island’s liquid gold, olive oil. From peppers to pomegranates, the produce is all about fresh, crisp and flavorful.

Meals are typically served family-style, with dishes on the menu including items like fried snails garnished with French fries or boumbouristoi, and rusks, a traditional dried bread that’s moistened with a little water and topped with grated tomato, cheese, olive oil, and oregano. Cretan meats often include pork or rabbit cooked in a pot with red wine. Cretans don’t eat as much seafood as they do meat due to overfishing that’s pushed the prices up – when you find it on the menu, it’s usually cooked lightly in olive oil and well worth the splurge.

Save room for dessert like kalitsounia, a sweet cheese pastry that’s a specialty here, fried or baked using mizithra cheese, sugar and cinnamon.

Naxos is especially famous for its cheese, graviera in particular. A Greek myth tells that the god Apollo left his son Aristaios, a skilled cheesemaker, on the island to teach Naxians the art of cheesemaking. The second most popular cheese in Greece after feta, graviera is primarily made from cow’s milk, with up to 20% sheep and goat’s milk. It requires at least three months of aging and is so famous here that it’s been given a Protected Designation of Origin (PDO) since 1996. You’ll find it cubed on salads, grated over pasta, fried or sliced.

Potatoes from Naxos sometimes referred to as Naxian potatoes, are famous for their rich flavor. The microclimate and soil results in a clean, sweet taste that make them renowned throughout Greece. You can find them on the island stuffed, boiled, barbecued or even in a souffle. Naxos even hosts a festival for its potato annually in early August.

Enjoy a wonderful wine and cheesemaking experience in Naxos on our Wine, Cheese, Oil and Islands 10 Day Journey > 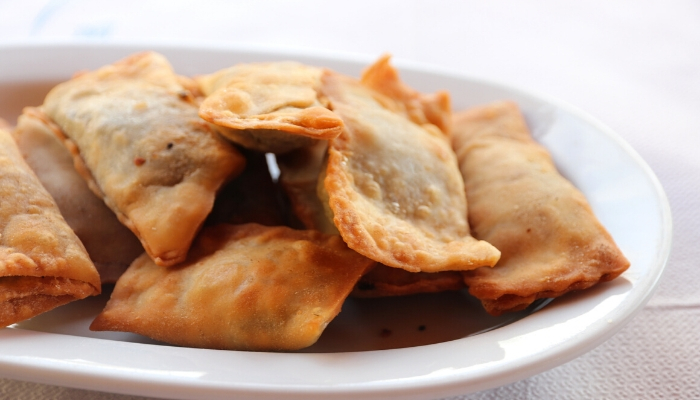 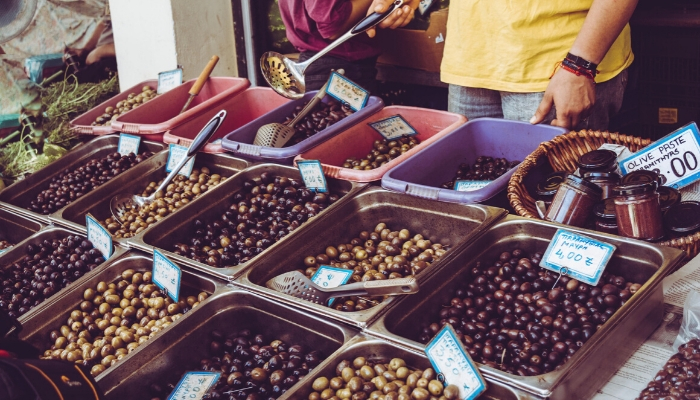 Beautiful Milos, also spelled Mylos, has become an increasingly popular foodie destination among Athenians who come to enjoy its sophisticated, authentic Greek cuisine. It boasts its own mouthwatering local fare using unique traditional recipes and local products, often with cheeses and meats cultivated on family farms. You might find rooster cooked with tomatoes and wine, pork with eggplant and small pies called pitarakia with mizithra or peppery cheese. Lamb baked in the oven with cheese and dill, and fresh grilled fish are all popular too. For dessert, there might be a traditional sweet pie with watermelon or gliko koufeto, made with sweet courgettes, almonds, and honey.

Traditional Corfiot dishes tend to bring a delicious blend of Greek and Venetian tastes. Some of the island’s popular traditional products include extra-virgin olive oil, honey, and sheep yogurt. You might find influences from other regions too, like spices from the east and French cooking techniques. The cuisine on Corfu is dominated by the use of spices like cinnamon, allspice, and cloves as well as garlic and wine. As the island is a verdant, green garden compared to some of the other drier Greek isles, produce is plentiful, and, of course, as it’s surrounded by water, fish and seafood are plentiful too. Basic seasonal ingredients include everything from mussels and sea bream to figs and zucchini.

Sofrito is one of Corfu’s trademark dishes, made up of thin, fried slices of beef cooked in a white sauce with white wine, vinegar pepper, garlic, and parsley, served with potatoes or mashed peas. Bourdeto is a typical Corfiot fish dish, made using various types of fish following the same recipe, cooked with lemon juice, red pepper, and onion. 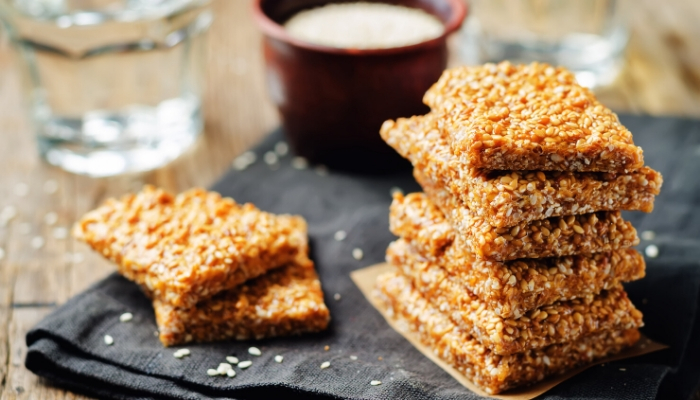 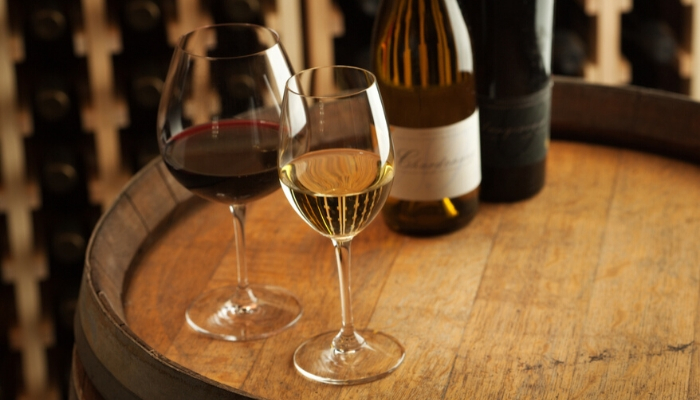 One of the most enchanting islands in Greece, Amorgos is not only renowned for its wild natural beauty but delicious local specialties. The rocky, mountainous terrain affects the dishes here, which are often meat-based, including pork, goat, and lamb. The most typical Amorgian dish is Patato, a rich casserole made with potatoes and goat meat in tomato sauce. There are lots of wild herbs and greens used, along with local cheese. Pasteli is the island’s traditional sweet, made with honey and sesame seeds that are placed in a lemon leaf and sprinkled with cumin seeds. Psimeni is the local raki, a homemade liquor often flavored with honey.

Greece is renowned for its wine, particularly the indigenous wines produced on the islands of Santorini, Crete, Drama, and Nemea. They’ve been making wine on Santorini for more than 3,000 years, with some 40 native grape varieties grown here. The vines laying low to the ground in round baskets which helps to protect them from the wind. Assyrtiko is the most popular variety, rich in minerals with a wonderful flavor, used in most of the white wines. Nykteri and Vinsanto are just two of the other favorites.

One of the oldest wine-producing regions in continuous use in Europe is Crete, which has a wine tradition that dates back 4,000 years. There are many wineries in and around Heraklion and Chania – wine is part of the daily life and culture on the island. The indigenous varieties include whites like Vilana and reds such as the legendary Romeiko. Drama is a wine-producing region in East Macedonia and Thrace, which grows native Greek grape varieties like Robola and Assyrtico along with lots of international varieties such as Syrah, Merlot, Cabernet Sauvignon, and Chardonnay. It’s a more modern region, with its viticulture focused around the town of Adriani, where the first winery was founded in 1992. Nemea is considered one of the most important red wine appellations in the country, situated in the northeast corner of the Peloponnese peninsula. The valleys and mountains that surround the village of Nemea have been producing wine in this region for centuries, primarily from the indigenous Agiorgitiko grape. 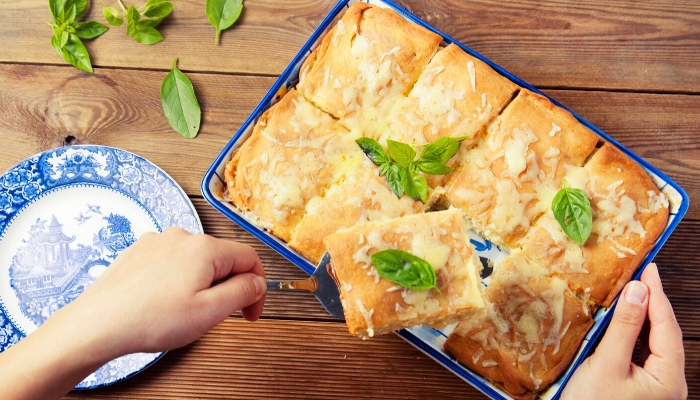 Hpeiros, or Epirus as it’s often spelled, offers rich, diverse cuisine with its primary ingredients coming from farms and mountains. It’s renowned for its exceptional, high-quality milk, delicious meats and cheeses from goat’s and sheep’s milk. Milk is the main ingredient in many of the traditional dishes here, while the mountains provide wild greens, nuts, mushrooms, fruits, and grapes. Like most places, olives and olive oil are common here too. There are dozens of different tyropites, or cheese pies, using salty feta, hard goat or curdled cheeses. Game and river fish are often on the menu along with thick soups with rice and an egg-lemon sauce called avgolemono.

Mykonos is renowned for its food scene, and the island offers some fabulous local gastronomic delights, including local cheese like kopanisti, a cheese that’s famous for its aromatic, spicy taste. Made of cow’s milk it has a creamy texture and is often served on rusks topped with olive oil and tomato, a popular meze (appetizer) that often accompanies local drinks like raki, tsipouro or ouzo before the main dish is served. The island is home to many fishermen, with the bars and eateries frequently featuring menus with the catch of the day, flavored with olive oil of course. For dessert, the island’s traditional amygdalota, or almond cookies, are a favorite.