From art to literature, style and music, Ancient Greece is a time period that still influences many people around the world. And 2022 is shaping up to be a year where it is, ultimately, having a revival.

This year has seen plenty of people take inspiration from the Hellenistic era and incorporate the aesthetic into their interior decor. We’re talking statues of Aphrodite, bold geometric designs and even the iconic Greek blue hue.

So, we have spoken to Juan Sandiego, Interior Consultant at Happy Home Clinic, about ways we can add a touch of ‘Greek Chic’ into our own decor!

What’s more, our very own Graham Carter (Co-Founder of Unforgettable Greece and Luxury Travel Advisor) has shared his expertise on Greek culture so that people can understand the fascinating history behind this trend.

Check it out below…

With understated style and simplicity, the elegant Greek column is something that has been admired for centuries. But this year, in particular, interest has been on the rise.

Searches for ‘Corinthian column’ on Pinterest have increased by 40% so far in 2022 which highlights that people are looking for ways to incorporate these ornate pillars into their decor.

Juan advises: “The most effective way to incorporate the Greek column trend at home is by using period coving and skirting boards. This may sound unusual, but these common architectural features have actually evolved from Ancient Greek style standards.”

“Alternatively, tall fluted home decor items will work perfectly. Think of ways to enhance the verticality of your pieces, like cylindrical vases or even coffee tables.”

Don’t worry: you don’t have to start tearing down your walls to incorporate these lavish features into your home. And if you’re wondering what they represent…

Graham explains: “Of ancient column styles, or orders as they’re known, the Corinthian order is the most ornate. It is known for its elaborately carved top, which often incorporates ornamentation that is carved to resemble leaves and flowers. Because of their opulence, they represent luxury, so I am not surprised that people are bringing Corinthian columns into their homes.” 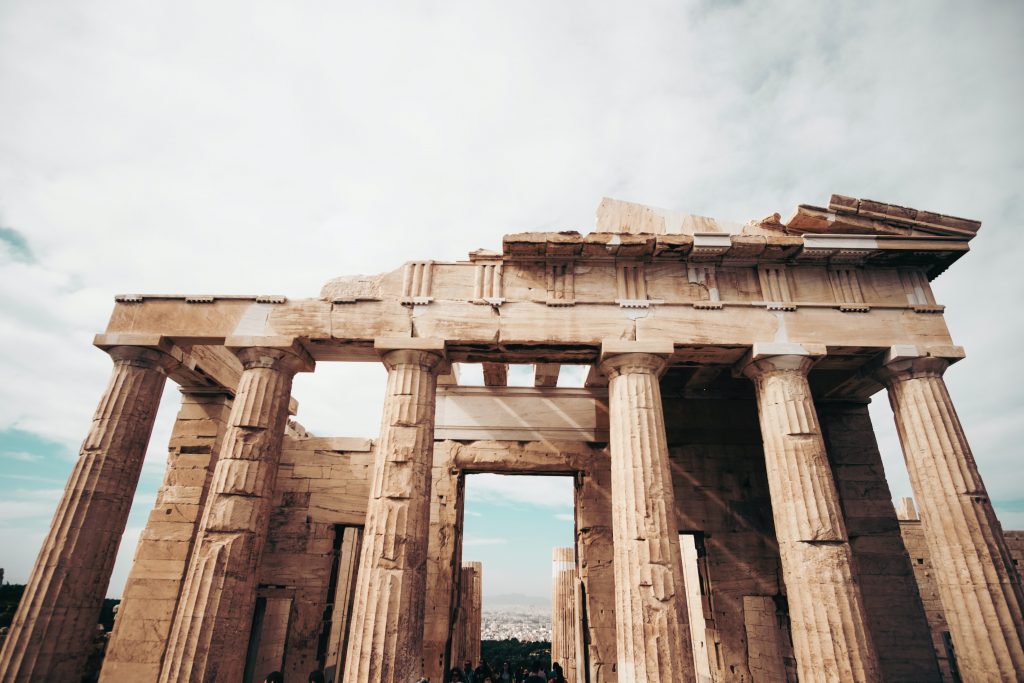 As well as lofty luxury, it appears that people are also looking to add a touch of L-O-V-E to their interiors.

Searches for ‘Aphrodite aesthetic’ have been high during the last 6 months, peaking in volume last month according to Pinterest data.

“Aphrodite, the goddess of love – her symbols include natural elements such as roses, ivy, myrtle and seashells. Small birds such as doves and sparrows also fit the natural theme nicely. Think of Botticelli’s Birth of Venus.

“At home, you can bring femininity form infused with nature with soft pinks, blush red and earthy browns. These are ideal colours to bring skin colour diversity to your walls and accessories.”

As the goddess of love, Aphrodite was a sculpture particularly popular in Ancient Greek times… and it turns out that she is just as popular today!

“Aphrodite is associated with lust, beauty, pleasure, passion and procreation. Beautiful and enchanting, she was frequently depicted nude, symbolising the perfect woman that is both infinitely desirable and infinitely out of reach. If Apollo was regarded as the ideal perfect male form, Aphrodite was without a doubt his female counterpart”,  explains Graham. 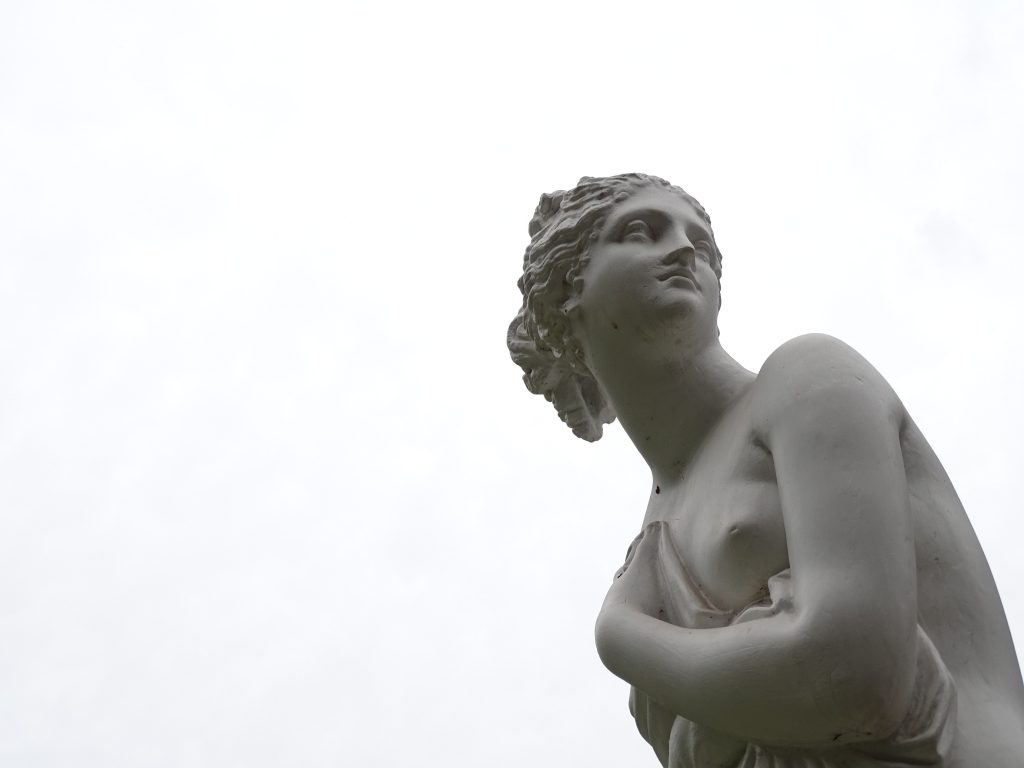 And it’s not just Aphrodite’s body that people are taking influence from. ‘Greek statue art’, as a whole, rocketed three times higher in the number of searches this year compared to last, suggesting that people are particularly keen to bring this kind of iconography into their homes.

“Over the last few years, I have seen a rise in home decor depicting the human body, from wall art featuring simple faces to cheeky plant pots. This has now peaked with Hellenistic revival and taken to the third dimension with sculptures,” explains Juan.

And you don’t have to go big to make an impact at home when it comes to statues.

“Pick a small statue or bust and group it with contrasting pieces such as books or tall vases. Most neoclassic-look sculptures will work. Think about those inspired by Greece, the Romans and even the Georgians.”

Graham reveals: “People’s interest in the legacy of Ancient Greek sculptors is still incredibly high today and we provide tours to people all around the world who want to see some of the most famous work. Most sculptures focus on Greek gods, goddesses and heroes as a means of worship and honour. These statues are timeless, so using these in decor is a timeless way to celebrate the human form in our homes.” 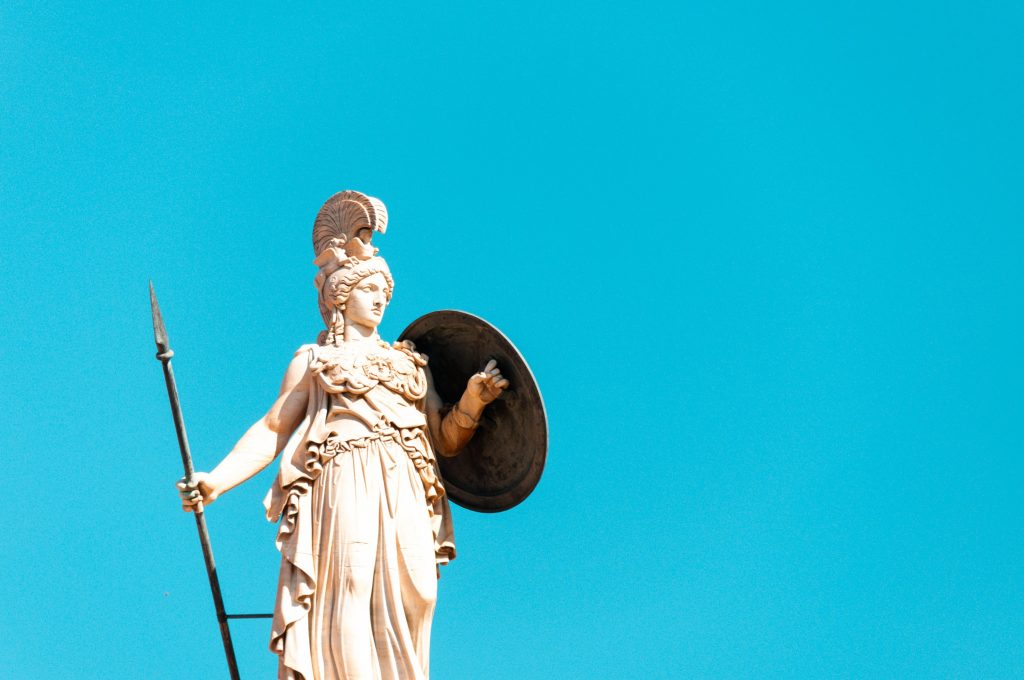 When we think of Greece, we see white and blue. White, limewashed houses with vibrant blue roofs. White, sandy beaches that lead out into the azure blue sea. And we’re sure we’re not the only ones…

Well, it turns out that we’re not. Whilst white and blue are a dominant colour combination in Mediterranean decor, it appears that others are now trying to incorporate them into their own interior…

Pinterest searches for ‘Summer in Greece aesthetic’ are currently seeing the highest volume in the last 12 months.

Juan suggests: “The secret to infusing your home with the classic Hellenistic colour palette is to tone it down. White should be the main colour for walls and ceiling. This creates the perfect backdrop for the bright blue accents. You could use blue in curtains, cushions or even door frames.”

“And here’s a tip: add gold or brass accent pieces to elevate the classic white and blue combination!”

Blue and white is a combination that is cooling yet vibrant, classic yet sharp, But Greece didn’t stumble across this by chance.

Graham explains: “Whitewashed and blue-coloured houses are a Greek-island trademark. In fact, it actually became mandatory in the 1960s to paint all island houses in these colours as a sign of patriotism and unification. Contrary to popular belief though, this colour palette was not to reflect Greece’s flag and originally came about for two reasons.

“Greek buildings are made of stone and mud but the dark colour of these materials made it difficult to be inside during the heat, so they used whitewash to reflect the heat. The blue comes from a cleaning agent called Loulaki. As it was cheap, most households would have had it on hand and so it became pretty default.” 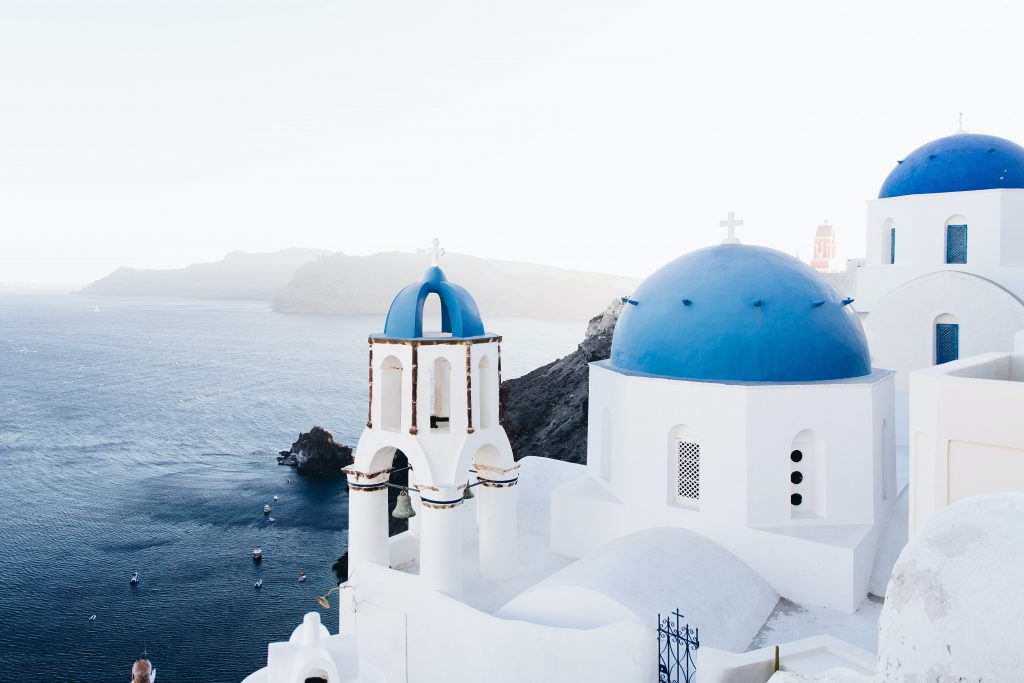 Instantly recognisable, the Greek key, known as a meander, is a geometric pattern featuring lines that bend at straight angles. It symbolises unity and infinity and the Ancient Greeks used it everywhere, from pottery to floor mosaics.

So, want to know how to use it in your home?

“Due to the extra bold nature of the Greek key, I recommend using it in small doses, like faux antique ornaments or subtle DIY paint treatments on upcycled furniture,” says Juan.

“If you’re feeling brave, invest in a patterned blanket so you can style it on the sofa as discreetly or boldly as you wish.”

If you’re feeling really brave, use a geometric wallpaper that incorporates both vibrant colours and a sophisticated pattern. This will put a modern twist on something very historic and the striking, repeated design will stand out in any space.

And it appears that people are feeling brave, with searches for ‘geometric accent wall DIY’ increasing by 150% in the last 12 months.

So, it appears that Greece really is the word… on everyone’s lips.

And if this cultural trend has inspired you beyond your four walls, why not have a look at our luxury Greece trips?

We can promise enough Greek statues, landscapes of white and blue, and Corinthian columns to fill your boots!

For anyone that has an interest in ancient Greek history and culture, this private tour is a must. You’ll discover some of the country’s top ancient sites, including the remarkable town of Mycenae where the Mycenaeans thrived from 1650 through 1200 BC, the site of the very first Olympic Games, the oracle of Delphi, stunning Meteora, and much more.

Anyone dreaming of seeing that iconic colour combination in real life should book this trip of Aegean gems. It includes a visit to Sarakiniko beach with its smooth white volcanic rock stunningly contrasting against the blue sea and a few nights in Santorini where you can enjoy the picture-perfect white and blue houses.