Cheesecake is not from New York – it’s actually from Greece!

Home » Destinations » Cheesecake is not from New York – it’s actually from Greece!

Cheesecake is not from New York – it’s actually from Greece!

We all have favorite foods, whether it be chocolate, pasta, or even a peanut butter and jelly sandwich. But, when enjoying these, how often do we stop to think about where they actually come from?

Of course, most people have a general idea about the origins of their food. The samosa is from India, pasta from Italy, and fajitas from Mexico, surely?

But, the origins of some food are not often as they seem… including all three mentioned above!

With that, we thought it would be interesting to dig deeper into some of the world’s most popular foods and find out if they really are as authentic as we perceive them to be.

What’s more, at Unforgettable Greece, we know just how fantastic Greek food is and this got us thinking…

Aside from well-known pita bread and souvlaki, what other global cuisine do we have our ancient Greek ancestors to thank for? Read on below to find out!

New York City Cheesecake. Considering the name, we understand how one might assume that this creamy dessert originates from the US city. But, centuries before New York was even thought of, cheesecake was served to athletes as a source of energy at the first Olympic Games in Greece in 776 BC.

Whilst the recipe has since been developed, the oldest surviving Greek recipe (recorded in 230 AD) instructed to pound the cheese until smooth, mix with honey and spring wheat flour, heat into one mass, allow to cool and then serve. Voila!

And, although New Yorkers contest that cheesecake was not really cheesecake until they created cream cheese, the present-day recipe is not all that different from the original Greek one. The New York version was invented by Arnold Reuben in 1929 and now includes pure cream cheese, cream, eggs, and sugar. 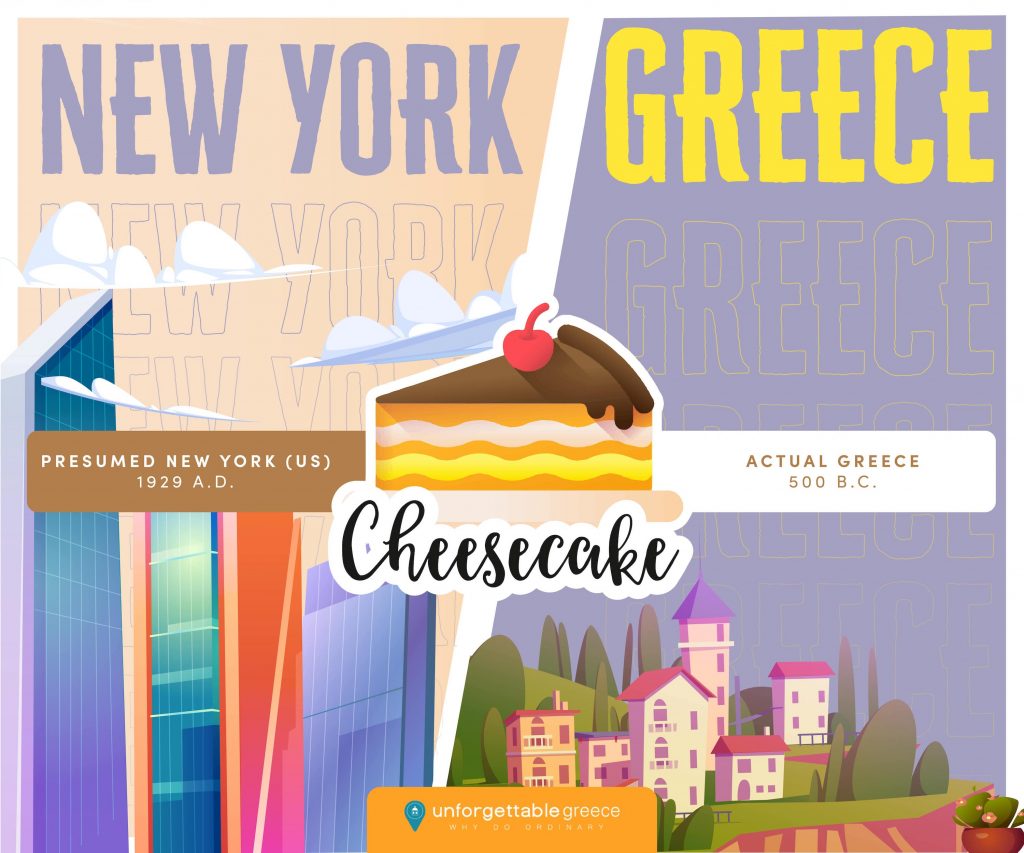 Surely, everyone has eaten a pancake at least once in their lives, especially on ‘Pancake Day’, as it is affectionately called. The concept of eating pancakes on Shrove Tuesday first came about in 1100 AD when it became a traditional way to use up dairy products before the period of lent. Fast forward a few years and you can now find pancakes on pretty much every brunch menu around the world.

Yet, the pancake was not invented when Shrove Tuesday was in 1100 AD and instead dates as far back as 600 BC when an ancient Greek poet described warm pancakes in one of his writings. Today, lemon and sugar are a classic topping but back in ancient Greece, tagenites, as they were then called, were topped with honey and made with wheat flour and olive oil. 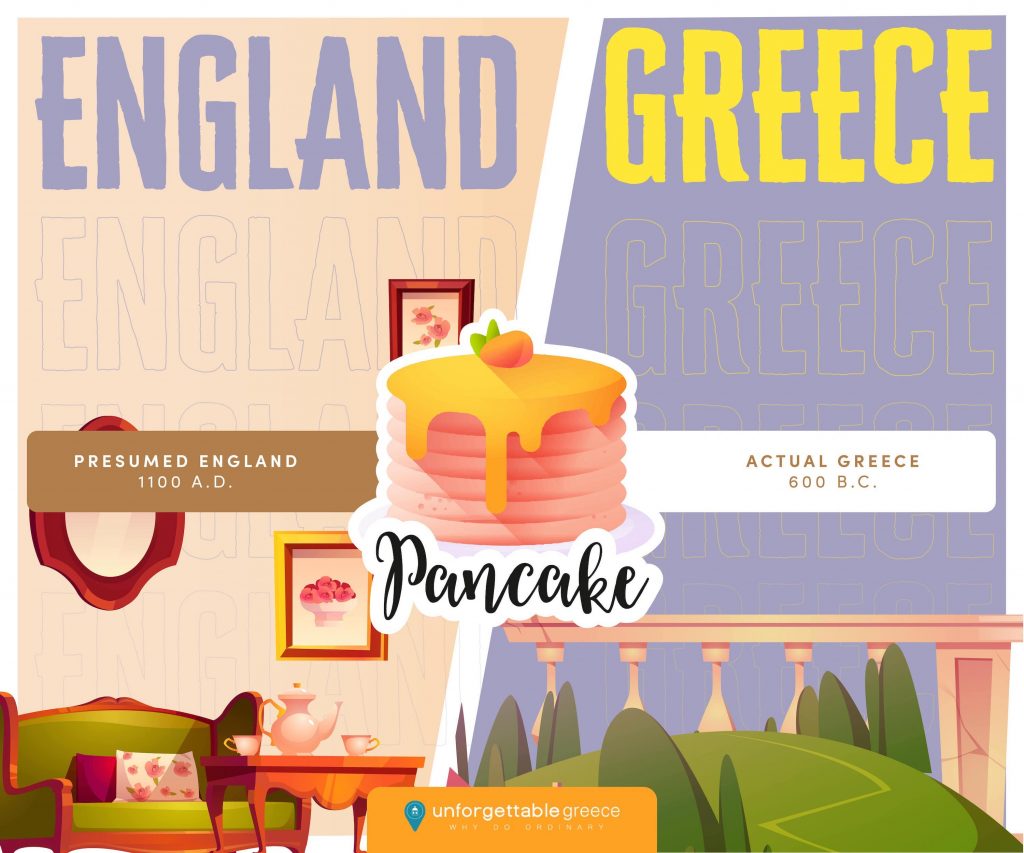 Although typically considered an American all-star dessert thanks to global brands like Dunkin’ Donuts and Krispy Kreme, you might be surprised to find out that doughnuts do not actually derive from New York City. The earliest version of the doughnut can actually be traced back to ancient Greece.

In fact, they date as far back as the first Olympic Games in 776 BC, when they were presented to the winners as ‘honey tokens’. Although lacking the now-distinctive ring shape and hole, Loukoumades, as they are still known in Greece, are small doughnut balls covered in honey and walnuts. Delicious.

The dessert then made its way over to the United States with Dutch settlers and the first doughnut shop was opening in New York City in 1673. 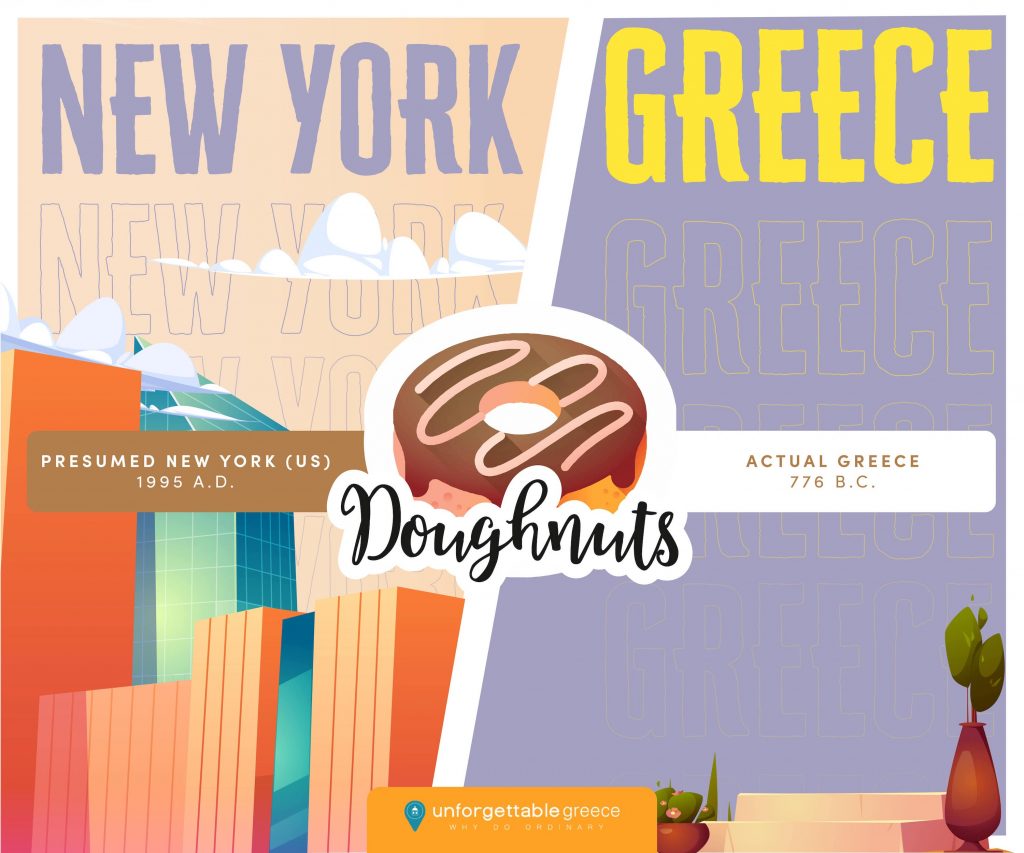 With over 30,000 stores around the globe, Starbucks is considered the most popular coffee chain in the world and come summer, many people swap their hot, frothy coffees for a cooler, blended beverage – a frappuccino.

And, although the global coffee company launched the popular drink in 1995, the blended coffee concept was first concocted in Greece, albeit not too many years earlier this time.

Invented by Dimitris Vakondios in 1957, the frappé is a mix of instant coffee, water, sugar, and milk. The Nescafé representative actually created it when experimenting after he couldn’t find any hot water and so mixed the coffee with cold water and ice cubes in a shaker – and the concept was born! 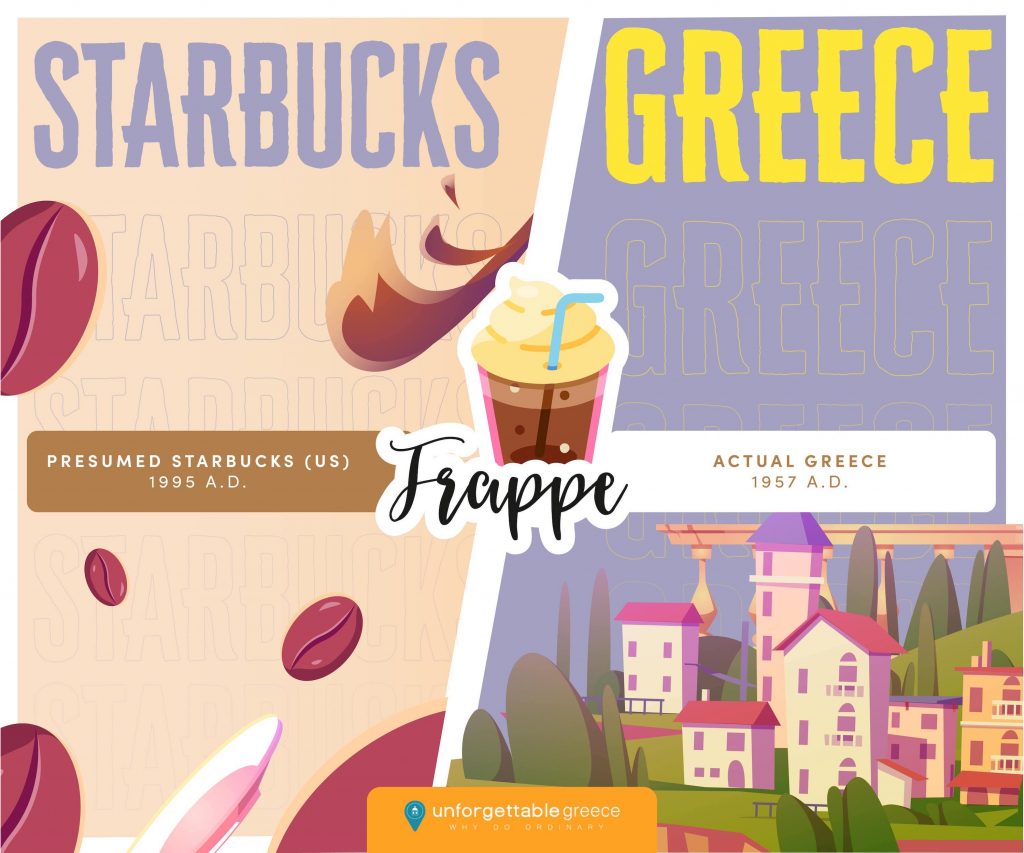 And it’s not just Greece that holds the true origins of some of the world’s famous foods, you might be surprised to hear that pasta does not actually originate from Italy, that Danish pastries weren’t invented in Denmark, and that Fortune Cookies aren’t from China. 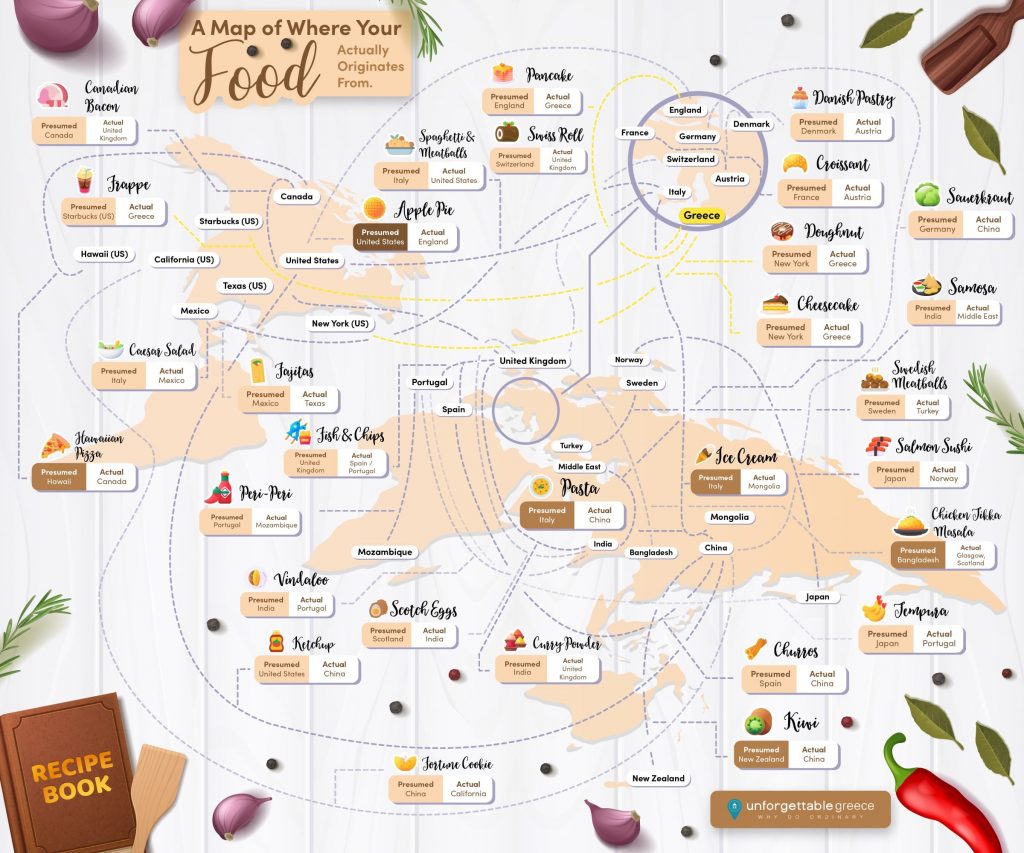 For the information included in this map, we used a range of reliable sources including Food & Drink magazines, cookbooks and travel publications.